Sure, here in New York City, we’re known for the slice—of pizza. But did you know we’ve also made somewhat of a name for ourselves in the world of watermelon? In honor of National Watermelon Day on August 3 (yup, it exists!), we thought what better way to celebrate than with a list of some of the city’s juiciest dishes. How many have you tried? 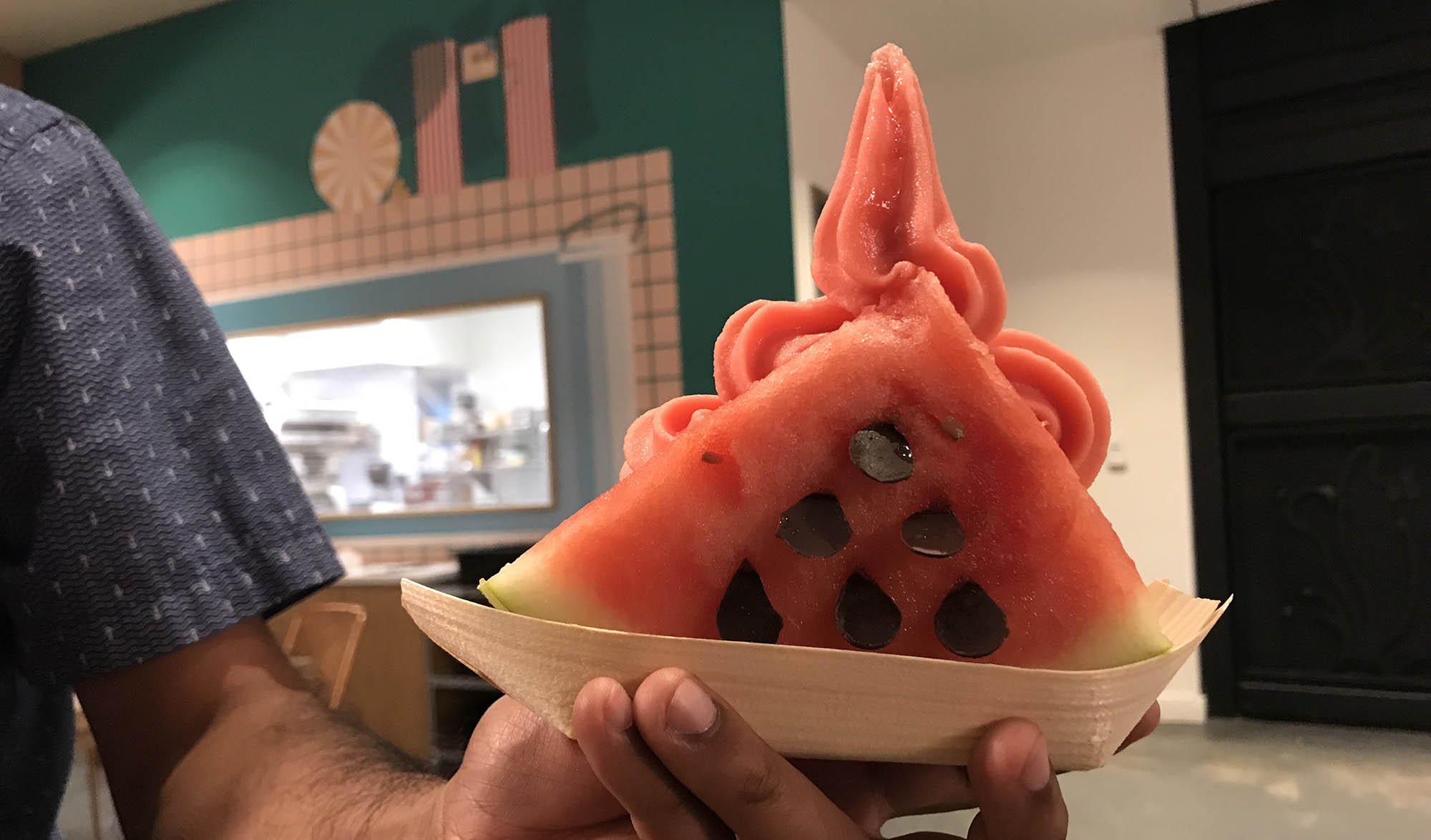 Pâtissier extraordinaire Dominique Ansel created What-A-Melon back in 2017 at his Tokyo bakery. It’s since made its way to New York at various times in limited servings. A cool, refreshing treat, the juicy slice features a hollowed middle cradling a watermelon soft-serve twist. And those seeds? Made out of dark chocolate. We’re not sure when it will be back but we definitely recommend trying it when it’s here.

Though this one’s a drink, it’s been around for a while and is so special that it deserves a spot on our list. Soju is a clear, colorless distilled Korean beverage, and in Manhattan’s Koreatown, you’ll find a Watermelon Soju at Pocha 32 that makes for a wonderful centerpiece during your family-style meal. Served in a halved, hollowed watermelon punch bowl, the drink is made from puréed watermelon, soju, Sprite, added sweetener and full of ice. Perfect on a hot day! 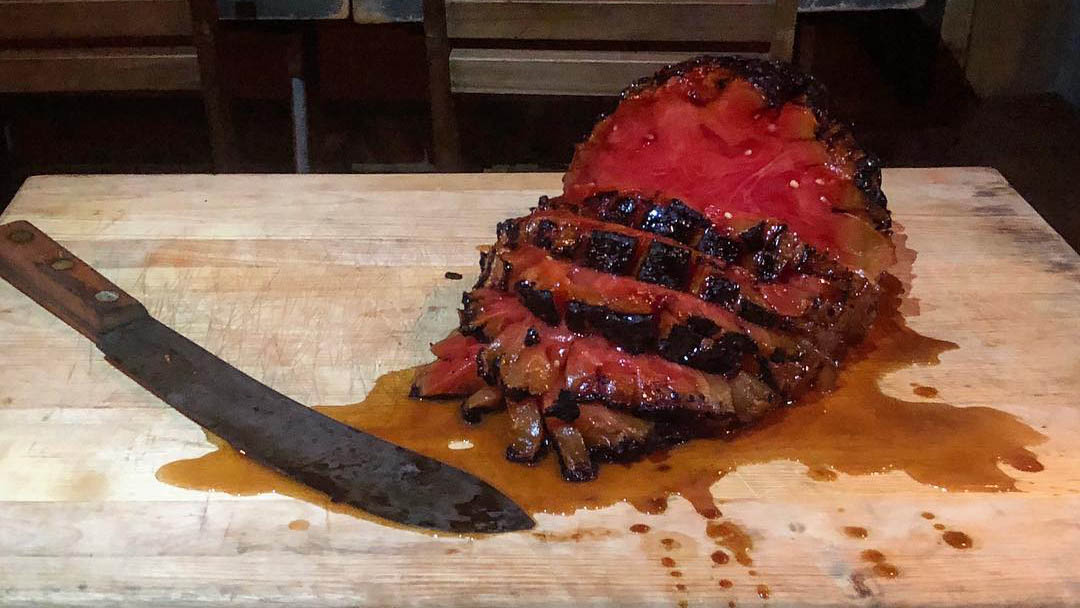 Last year the $75 smoked watermelon “ham” at Ducks Eatery went viral, racking up around 100 million views and selling out in the restaurant. It came back this past July though. We haven’t tried it yet but it looks unique and labor intensive. The gourmet fruit is cured for four to six days, dried and smoked for eight hours before being finished in a pan. And though it did go viral, chef and co-owner Will Horowitz created the dish because of a sincere interest in both smoking and treating fruits and veggies with the same care as meat. Looks so much like meat, doesn’t it? 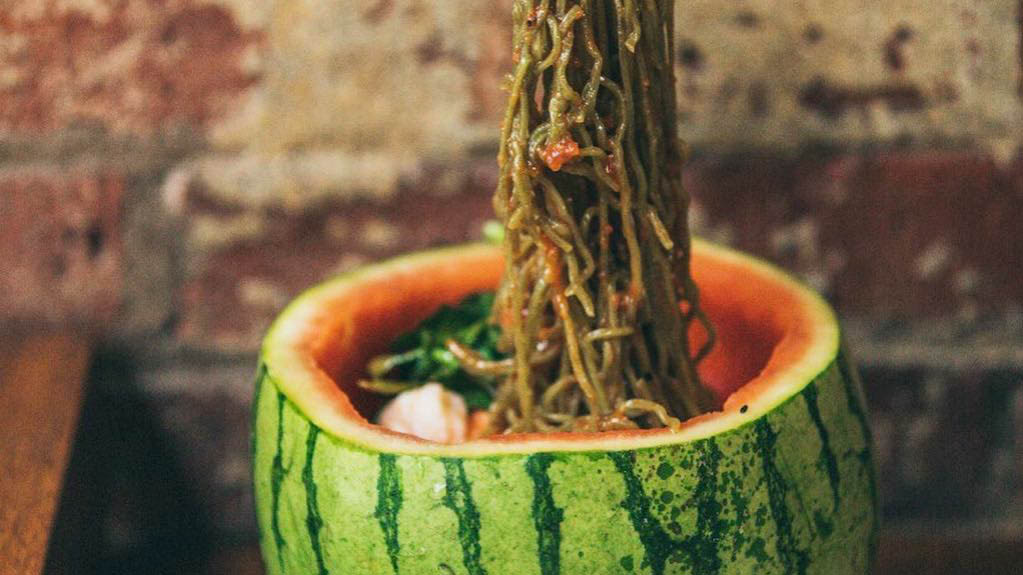 Speaking of things served in halved watermelons, mokbar got a lot of press last year for its Matcha Melon Bowl—their take on traditional Korean watermelon soup, subak naengmyeon. The dish is made of cold matcha noodles, garlic shrimp, bulgogi beef and gochujang dressing, and is available seasonally. Follow their Instagram to find out when and where. 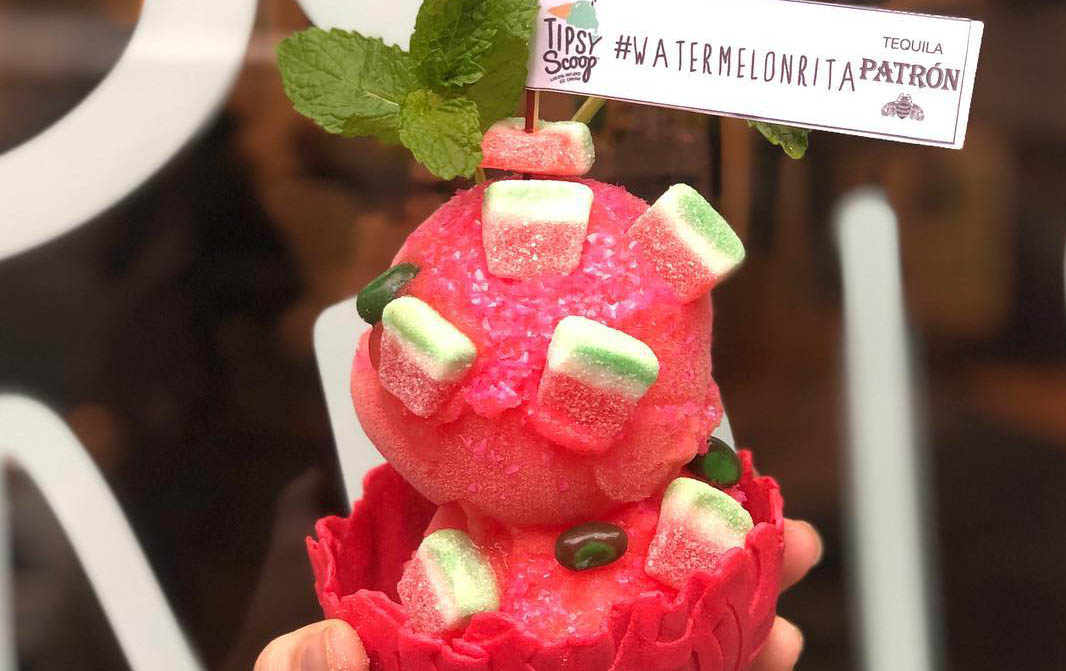 Newly opened in Brooklyn with a flagship in Manhattan, Tipsy Scoop is an ice cream barlour that serves photo-worthy, liquor-infused creations. The Brooklyn location has a Watermelon Mint Margarita Sundae (spiked with tequila) that looks worth standing on line for.

Last but not least, the Salted Watermelon Frosé at Elsa was a thing in 2017. Is it still? We aren’t sure, but if not we hope they bring it back because we never got a chance to try it. Garnished with a slice, this cocktail is said to be salty, sweet and delicious.